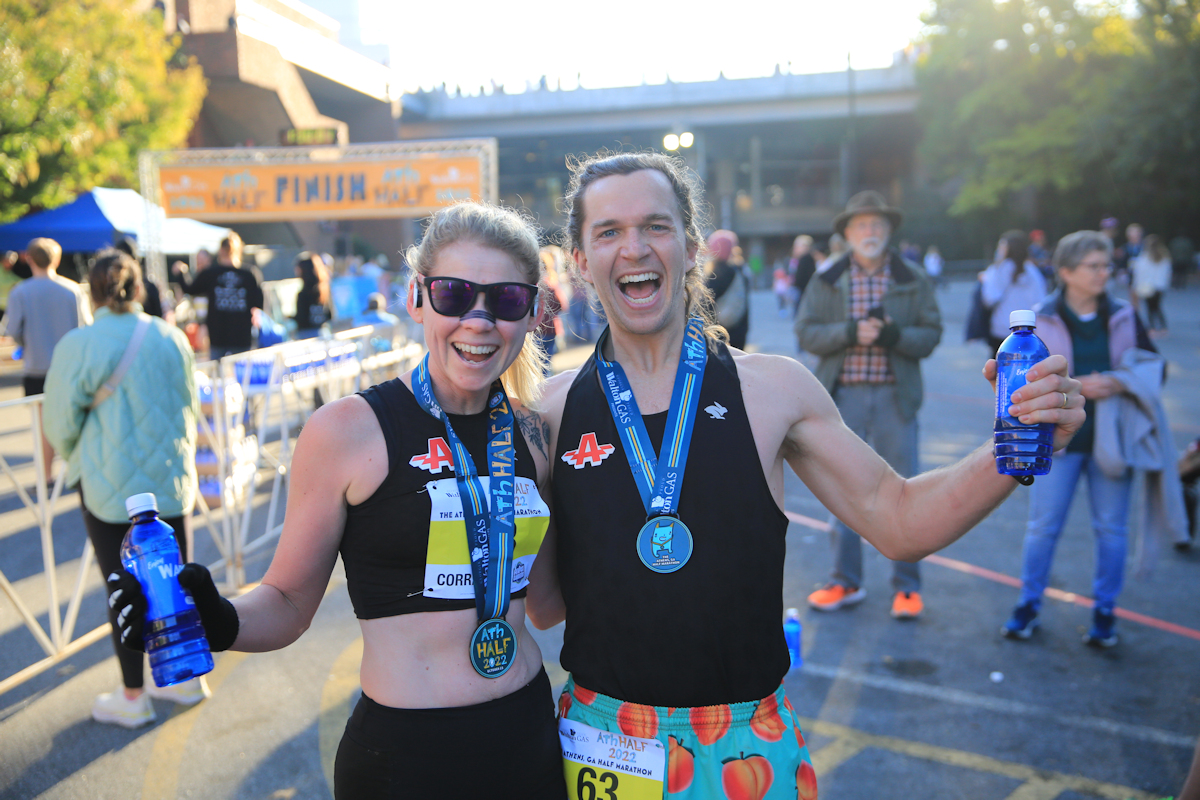 This year’s AthHalf weekend was indeed record-breaking, both in terms of race participants (2,388 finishers of the 5K and 13.1 miler combined) and for providing the most ideal running weather in the event’s 14-year history.

As usual, a good many Athens Road Runners took part this year, and once again members of the Athens Racing Team clocked some of the most impressive half marathon finish times. Devotion to regular training is almost guaranteed to bring results, provided it’s well-conceived and kept in balance with other aspects of one’s life. Profiled below are the performances of four team members who surely did things right leading up to AthHalf. And, on race morning all ran smart enough to defeat the Ag Drive and Morton Street hills and eclipse their goal times.

Reese Walker (5th place overall and 1st male 30-34, in 1:16:49) held back early, averaging 6:02 per mile as he hit 10K in 37:31 alongside teammate Griffin Clabaugh. Both then sped up considerably, with Reese covering the final 6.9 miles at 5:42 pace…something those of us who struggled during the late miles find hard to believe. (Griffin also had a stellar race, crossing the finish line directly after Reese in 1:17:29.)

“The truth about the AthHalf course,” Reese notes, somewhat in jest, “is that the second half is faster than the first, especially the last 5K. Morton Hill is terrible no matter what, but anyone who views it from a negative split perspective can make it happen. You have to make your body believe it to commit!”

Understandably pleased with trimming 5:06 off last year’s AthHalf time, Reese has an explanation for his big performance jump. “Being in a routine training plan made the biggest difference,” he says, “as opposed to running whatever I felt like that day. Hard workouts are crucial, but running lots and lots of slow, easy miles is the largest change I’ve made.”

As he now shifts his focus to training for next April’s Boston Marathon, Reese’s outlook is good advice for all of us: “I’m always hungry for higher goals, but training is the fun part, and racing is like a celebration. I encourage everybody to enjoy both aspects of the sport!”

Chrissy Proctor (3rd female overall, in 1:27:27) not only lopped 2:30 off last year’s AthHalf time, but she also ran almost a full minute faster than her 1:28:14 personal best recorded nine months ago on the very fast Swamp Rabbit course. That kind of improvement doesn’t come easily, and Chrissy has been working hard to make it happen. “I knew I was in good shape but did have doubts the week before the race,” she says. Somewhat fewer miles than previous half marathons produced the concern, but her coach’s guidance proved valid. “I let those doubts go and visualized a successful race,” Chrissy explains, “and it was great to execute her plan and see that you can get faster without increasing mileage.”

Getting somewhat more sleep, due to daughter Penny being a little older, has contributed to Chrissy’s increased training productivity. “I’m able to train at a high level again without running myself into the ground,” she says. “I’ve also been doing strength training two times a week and have continued to bike and swim on days I feel too sore to run.”

But Chrissy says something else has been even more essential. “The biggest inspiration has to be the Racing Team,” she explains. “I spent many mornings with Reese, Emily, Sally and Krystina over the summer, running through the worst weather. We held each other accountable. It felt so good to podium [at AthHalf] for the Racing Team and continue the success of our female runners at this race.”

Chrissy’s racing appears destined to continue its upward trajectory. And, when asked about her plans for 2023 she doesn’t hold back: “I’m ready to go for big goals next year,” she says. “I really want to go sub-3 in the marathon, and I think I could potentially do it at Houston or Boston.”

Michael Marshall (1st male master, in 1:25:45) has been on a tear for more than a year (including a national caliber 5:06 at Milledge Mile) and expected to improve on his 2021 AthHalf time of 1:30:02. But he surprised even himself by cutting his time by more than four minutes, which translates to speeding up by just shy of 20 seconds per mile.

As a runner who enjoys racing across the distance spectrum rather than specializing, Michael’s training varies quite a bit throughout the year. His exceptional mile was followed by a shift in training focus, as he upped his long runs and weekly mileage and implemented more cross training in preparation for a 10-hour adventure race in September. “That ended up being a great base for AthHalf,” he says. “And after [the adventure race] I had six weeks to focus on the half marathon. The main thing I added in was weekly tempo runs — long runs with 5 to 10 miles in the middle at a faster pace. Those made a big difference in my ability to hold a faster pace for the duration of AthHalf.”

On race morning Michael covered the early miles with a few other club members and credits the camaraderie with helping him lock onto just the right pace. “I’d been training some with Chrissy and Rachel (Hopkins) and felt good pacing with them from the start,” he notes. Indeed, Michael was metronomic over the full 13.1 miles, as he averaged 6:33 per mile for the first 10K and then 6:32 for the final 11.1K.

Although he isn’t sure what his racing schedule will include the next several months, Michael has a few interesting ideas. “I won free entry into a 50K trail race happening in early December that I will probably do,” he says. “And my time in AthHalf has me thinking more seriously about trying a marathon; it’s been 30 years since I last ran one and it would be fun to try for a Boston qualifying time.”

What else? Well, Michael did admit to this: “I was inspired by the recent Backyard Ultra Satellite Team Championships, and I’m thinking about trying a backyard ultra sometime.” FYI, a backyard ultra is an ultramarathon event in which competitors must consecutively run the distance of 6,706 meters, or 4.167 miles, in less than one hour, and the race ends when only one runner remains to complete another lap. The current backyard world record is 90 laps, or just over 375 miles. I could absolutely see Michael excelling in this event!

Myra Moore (1st female 60-64, in 1:51:58) moved into a new age group earlier this year and has become an even speedier runner. She knew her AthHalf preparation was better this time around and expected to improve on last year’s 1:56:36, but not by almost five minutes.

How to account for it? Well, ARR clubmates get some of the credit. “I’m consistently inspired by the other members of the Racing Team,” she explains. “They’re such a determined and motivated group and motivate me to keep pushing.”

Several essential ingredients were key to Myra’s 1:51 performance, and as she says, “It’s ultimately all about the training.” She successfully worked up to a long run of 15 miles while also participating in twice-weekly workouts with Coach Al and regular weight training sessions with Sarah Godwin. “All of these things definitely built my strength and endurance,” Myra says, “and I finally heeded Al’s advice to rest and hydrate well in the days prior to the race. Easy to ignore, but incredibly important, especially for older runners.”

Myra describes AthHalf’s last few miles as a big challenge, but this year she paced herself better over the first ten which enabled her to run stronger toward the end. “It’s hard because you get caught up in the excitement and fun of the race,” she explains. “But I definitely did a better job this year of not over-doing it too early.”

AthHalf left Myra determined to maintain her proven training program, including her long run distance. But for the short term she’s enjoying heading out for morning runs without her Garmin or an agenda, noting “It’s great to be out on a beautiful morning without any goal other than experiencing the joy of running.” Could any of us argue with that?